Home » Blog » The Dreadful Effects of Arsenic in the Eighteenth Century 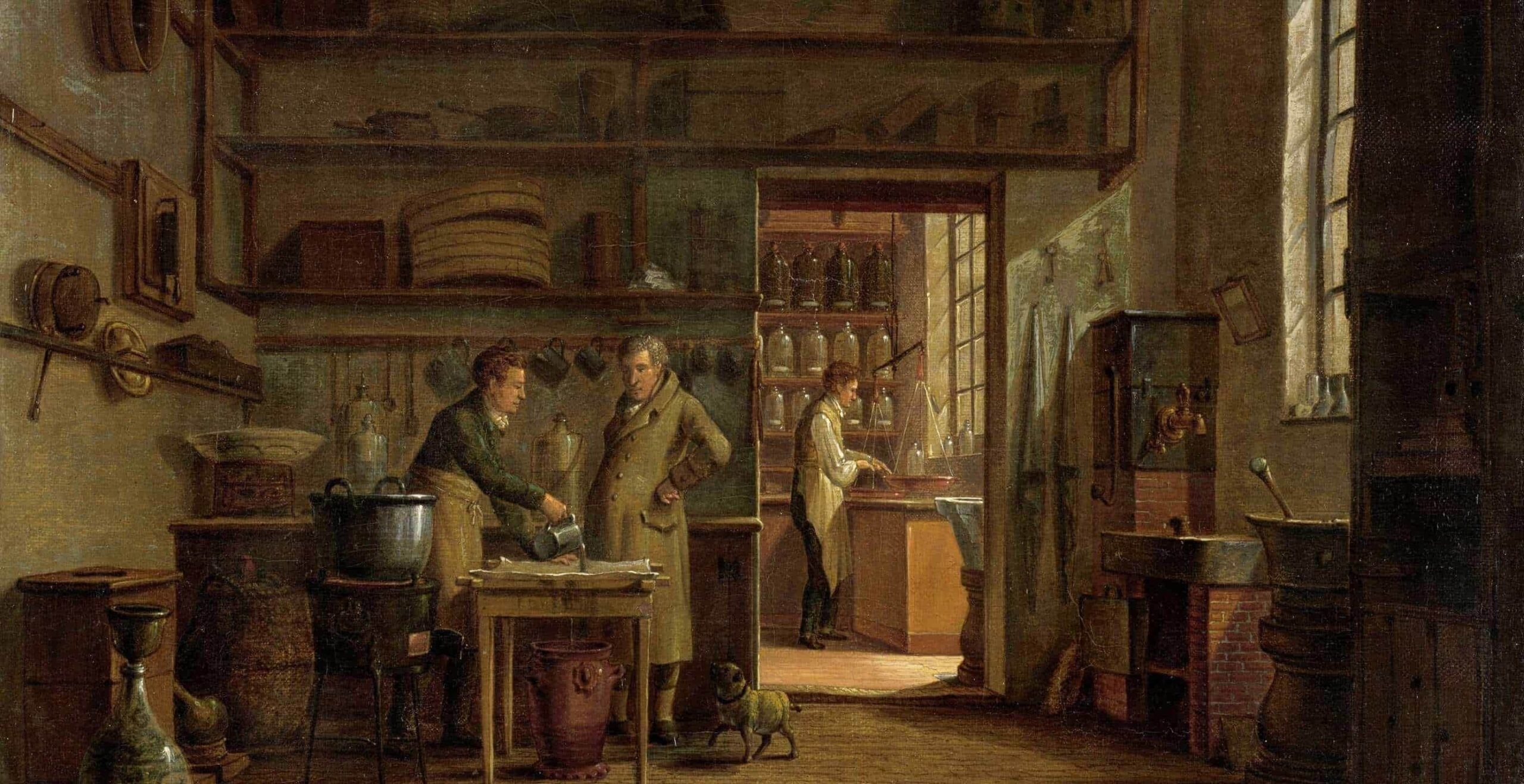 When researching Mary Blandy‘s story, I wondered how common arsenic poisoning was in the eighteenth century? Could there have been a simple explanation for her father’s death? First, I wanted to find out about its historic use.

History of Arsenic Use

For over 3,000 years practitioners of traditional Chinese Medicine have used arsenic to treat a multitude of illnesses including fever, asthma and tuberculosis. Hippocrates, the most famous of ancient physicians, recommended it as a tonic. The Roman Pliny wrote about it. Chaucer referred to it in his Canterbury Tales. In the 17th century, people placed a small amount in a small bag hung around their necks to fend off the Plague. Apothecaries used it to treat syphilis. But others did not use use arsenic for medicinal purposes. They had more nefarious purposes in mind.

Arsenic is a deadly poison. Emperor Nero used it to kill his step-brother Britanicus in 55 AD. Brother and Sister, Cesare and Lucretia Borgia, poisoned guests with arsenic. In France, heirs used it so often to dispense of wealthy ancestors, arsenic was called the “poudre de succession” or inheritance powder. And by the nineteenth century arsenic was the poison of choice for murderers. So how did people use it in the eighteenth century? After all, it was readily available at apothecary shops. Did they use it as a poison of choice? I turned to the newspapers in The British Newspaper Archive, to find out.

An Accidental Mixing at Buggs Mill.

in 1786, an exemplary and industrious labourer, William Benfield set off from home in the parish of Badgeworth with a sack of wheat. He was going to have the wheat ground at Bubb’s Mill, But somehow, the miller mixed Benfield’s wheat with a quantity of meal left by a ratcatcher. Soon Benfield, his wife and five children fell ill. When two neighbours borrowed a loaf, they too started vomiting. The loaf was examined, and particulars of arsenic found.

Mr. Clarke of Cheltenham helped the family. His medicine saved Mrs. Benfield and three children. But William died and the other two boys’ lives were in the balance at the time of the newspaper report.

What to Do if you swallowed arsenic

In Hauxton in Cambridgeshire, in 1772 a farmer was happily courting a woman. One Thursday afternoon, they drank tea together. Soon, they started to be violently ill. Some alarmed neighbours rushed to a local clergyman, who hastened to the house, He recommended oil and warm water. This saved the couple. On enquiry, the woman’s daughter admitted, that she was fearful of losing the house if the couple married. So, she bought a piece of arsenic “as big as an egg at the House of the Shepherd.” She pounded it into powder and put half into her mother’s tea. Chester Courant, Tuesday 1 December 1772

When a charwoman drank tea at Mary Blandy’s house, she became violently ill, purging and vomiting. The poor charwoman’s daughter visited Mary and told her how ill her mother was. Whether Mary knew the tea contained arsenic is moot. But she said, , “”Do not let your mother be uneasy, I will send her what is proper for her.” And, accordingly, sent her great quantities of sack whey and thin mutton broth.” These were known antidotes for poisoning.

Susannah Hanmere left the house to borrow a stone jug, which she filled with water. With it, she, her granddaughter and two other women made tea. Soon afterwards, Ann Homewright, Susannah’s granddaughter died. Smashing the bottle, they found white arsenic stuck to its bottom and sides. It appeared that a calico printer owned the bottle and had used it in his work.

An Arsenic Accident At Essex

Another accident happened to Mr. Sporgin of Chadwell in Essex. In 1792 he used to take a dose of brimstone. He sent his wife to get some, and she dutifully bought him a yellow powder, which she found in the closet. Unfortunately, unknown to her, it was yellow arsenic. Her husband mixed it into some water, drank it, and died in agony. Chester Courant, Tuesday 10 July 1792

The Crime of Murdering a Husband in the 18th century

Had Mrs. Sporgin known that the powder was arsenic, her fate may have been very different. Murdering a husband was petty treason, a crime punished by burning at the stake. Unlike Mrs. Sporgin, Susannah Bruford knew she was dealing with arsenic. Less than two months after she married John Bruford, Susannah fell for an Attorney’s Clerk she met watching fireworks at Taunton. She needed rid of her husband. Her first attempt to kill him failed. His ale tasted gritty and he put it aside. When an apothecary prescribed a Dose of brimstone for an itch, Susannah mixed it with arsenic. The quantity was enough to kill 20 men. Four days later, her husband died in agony and Susannah was arrested.

At her trial she was described as a woman of “loose disposition.” The trial lasted 6 hours, and despite the efforts of her 2 attorneys Susannah was found guilty. The judge ordered that she be drawn on a hurdle to the place of execution and there be burnt with fire till dead.

Burnt At the Stake?

Accordingly, Susannah’s execution took place at Cure-Green near Wells in front of a large crowd on 3 September 1753. But the executioner could not face burning her. Instead, he stood her on a stool, allowed her to say her prayers, then placed a noose round her neck and hanged her. Only when she was dead, did he place faggots around her, attach her to the stake with 2 plates of iron to keep her upright and light the faggots. The fire burnt for an hour. A small coffin carried away her few remains.

Life in service was hard. One servant lad purchased a large quantity of arsenic “under pretence of destroying vermin,” which he then swallowed. Although doctors applied antidotes, he died eight days later. The jury at the Coroners Court returned a verdict of Lunacy. Hereford Journal – Wednesday 8 April 1789

A young girl in service in a public house took arsenic and killed herself. The reporter “supposed a love affair was the course of this rash step.” Newcastle Chronicle Saturday 20 March 1773.

But other servants set out to kill their masters and mistresses. In 1770, Captain A’Court, a gentleman of fortune, hired Joseph Armstrong as a footman for a family visit to Cheltenham. His wife complained about Armstrong’s behaviour, and asked her husband to dismiss him. Armstrong bought arsenic from Hooper, a local apothecary, and mixed some into his mistresses’ tea on a number of occasions. After eleven days of illness, on Monday 23rd September, she “expired in a fit”.

The following day, Captain A’Court dismissed him for his brutal and insolent behaviour. Armstrong set off to catch the stage to London. But the lady’s father was suspicious. Jumping into his chaise and four, he chased Armstrong to a wood, caught him and turned him over to two constables.

On the day of his execution, the jailer went to Armstrong’s cell, But Armstrong cheated the hangman. He had found the means to hang himself.

Murderer By way of a Pudding or a Pie

On Friday 31st July 1789, the jury at the York Assizes, found Hannah Whitley guilty of putting a quantity of arsenic in a pie. Five year old Joseph Rhodes died. The judge sentenced her to hang. Leeds Intelligencer Tuesday 4 August 1789.

While in 1797, authorities accused Martha Dexter of mixing white arsenic into a pudding and killing her own mother Jane Small and son Thomas Dexter. Reading Mercury – Monday 1 May 1797

The Murder of Ann Jones

In 1790, a coroner’s inquest in Clodock, Herefordshire found a large quantity of yellow and white arsenic in the stomach of Ann Jones. The jury concluded Ann had died by poison. Two months later, her husband, William Jones, otherwise Watkins, and an accomplice, Susannah Rugg, stood trial for causing Ann’s death.

Watkins was 27 and had “led a very dissolute life.” He had recently co-habited with Rugg. Susannah was “a beautiful girl only 18 years of age, and born in Monmouth, where she had been a common prostitute for some time.” Watkins returned home, effected a reconciliation with his wife and then gave her a basin of broth, laced with arsenic. It killed her.

Susannah and William had probably intended to marry, and they were sure they would be acquitted. But, as the trial progressed, their confidence evaporated. An apothecary gave evidence that he had sold the arsenic to the pair and swore that at the time of the sale, by accident he had mixed the yellow and white arsenic together. They were found guilty. In jail, awaiting their execution, the guilty pair admitted they had bought the powder for the express purpose of destroying Ann.

Like Mary Blandy, Susannah’s fate excited much compassion. The reporter summed up, “Her wretched mode of life, supposed not to have been adopted or pursued by her own inclination; the influence which Jones may naturally be supposed to have had on her conduct; – her sex – her personal beauty – the unthinkingness of youth – and the frailty of us all – could not fail of being highly interesting in her favour; and though justice might make the sacrifice necessary, humanity may be permitted to shed a tear for the victim” Hereford Journal, August 4 1790. At her execution, “the youth, personal beauty and situation of the female victim, drew tears from every eye.” Leeds Intelligencer – Tuesday 24 August 1790

A woman was walking near the well in a village in Huddersfield in 1798, when she spotted a man dropping something into a well from a box. He shut his box, ignoring her questions. But as he walked off, he dropped something onto the ground. The local apothecary confirmed it was arsenic. Although the man was arrested for attempting to poison the whole village, no names appear in the article.

Just as today, some poisonings were accidental. Others were suspicious and others downright dastardly. If you want to find out more about poisoning in the eighteenth century, a good place to start is local newspapers. There are also tales in the Newgate calendar and court records. Your local library, online searches and Findmypast are great places to start. Findmypast includes free access to the British Newspaper Archive.

2. Arsenic – the “Poison of Kings” and the Savour of Syphilis”

3. On Joseph Armstrong, see the Newgate calendar and https://wshc.org.uk/blog/item/arsenic-and-old-heytesbury.html

NOTE: These are affiliate links for findmypast. They support me and my website with no effect to the cost of the memberships.

If you enjoyed this blog, why not read: