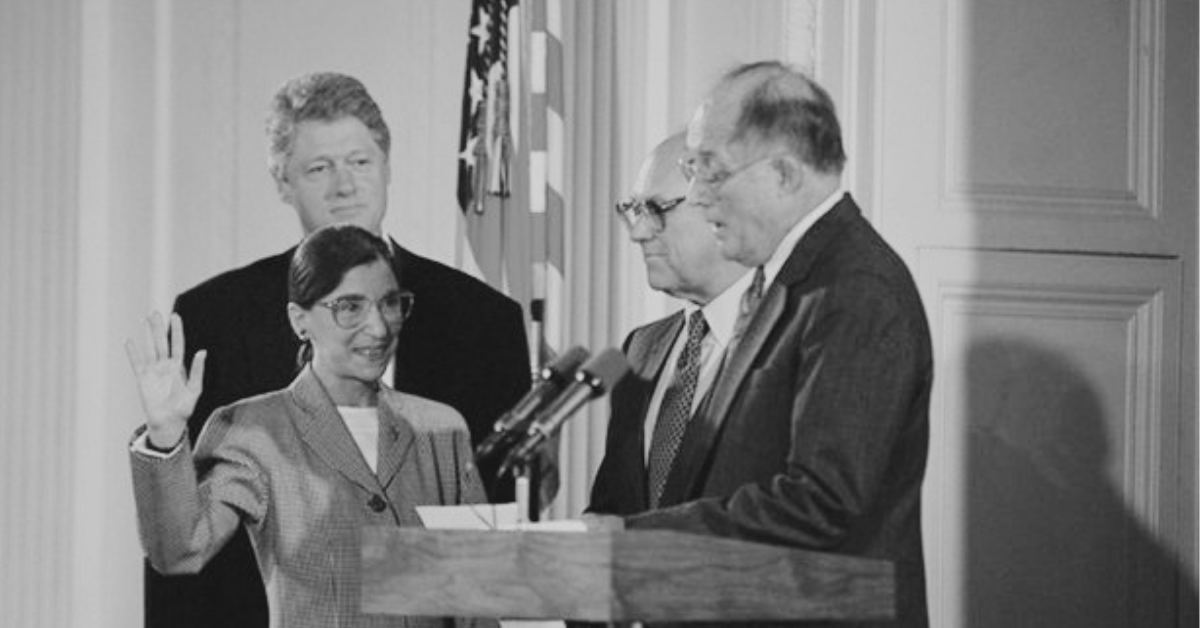 On 10 August 1993, Ruth Bader Ginsburg was sworn in as an associate justice of the US Supreme Court. She was the first Jewish female and second female justice to serve on SCOTUS. The American Bar Association gave her their highest rating, saying she was “well qualified” for the role. In this blog we set out a transcript of the speech she gave on the day she was sworn in. The sentiments she expressed are as relevant today as they were then.

Taking the Oath of Office

President Clinton nominated Ruth Bader Ginsburg for office. At her swearing in ceremony, he said, she defied labels such as liberal or conservative as she had a reputation for excellence. He continued, she had what many wanted, a successful work and family life, and hailed her work on gender equality.

After taking the Oath of Office, Ruth Bader Ginsburg, walked to the lectern, smiled and delivered the following speech.

Not yet two months ago, president Clinton announced his intention to nominate me as associate justice of the supreme court of the unites states. I said then that if confirmed I would try in every way to justify his faith in me. I renew that pledge this afternoon in the presence of people I hold dear; my family, colleagues, co-workers and treasured friends. There is one in this audience whose presence I want especially to acknowledge: she is my wonderful mother-in-law, Evelyn Ginsberg.

She was always there when I needed her: she sensed, without ever being asked when that was. She constantly held up my spirits when the going was rough. “These two will pass” she would say. I am overjoyed mother that you were with me today.

This weekend, I attended a celebration of women lawyers in New York. The keynote speaker was our Grand Attorney General Janet Reno. It may have been the best attended. It was certainly the most remarkable event at the American Bar Association’s Annual Meeting. Awards were made in the name of Margaret Brent: a great lady of the mid 1600s celebrated as the first woman lawyer in America. Her position as a woman yet a possessor of power so confused her contemporaries that she was sometimes named in court records not as Mistress Margaret Brent, but as Gentleman Margaret Brent.

Times are changing. The president made that clear by appointing me, and just last week naming five other women to article 3 courts. Six of his total of 14 federal bench nominees, thus far, are women.

I agree but I also have no doubt that women like persons of different racial groups and ethnic origins contribute, what a fine jurist the late 5th circuit judge Alvin Rubin described as, “a distinctive medley of views influenced by differences in biology, cultural impact and life experience”. A system of justice will be the richer for diversity of background and experience. It will be the poorer in terms of appreciating what is at stake and the impact of its judgements if all of its members are cast from the same mold.

I was impressed by the description of women at the bar by one of the 1993 Margaret Brent Prize recipients – Esther Rothstein – an attorney in private practice in Chicago. Esther said she found women attorneys to be tough yet tender;wanting to win but not vindictive; cautiously optimistic with the sense to settle for victories that do not leave ones opponent bloodied and bowed; willing to be a link in a chain that is strong yet pliable.

In my lifetime, I expect there will be among federal judicial nominees, based on the excellence of their qualifications, as many sisters as brothers in law. That prospect is indeed cause for hope and its realisation will be cause for celebration. Thank you.