Home » Blog » Jeanne Baret: The greatest disguise, botany, love and a trip round the world 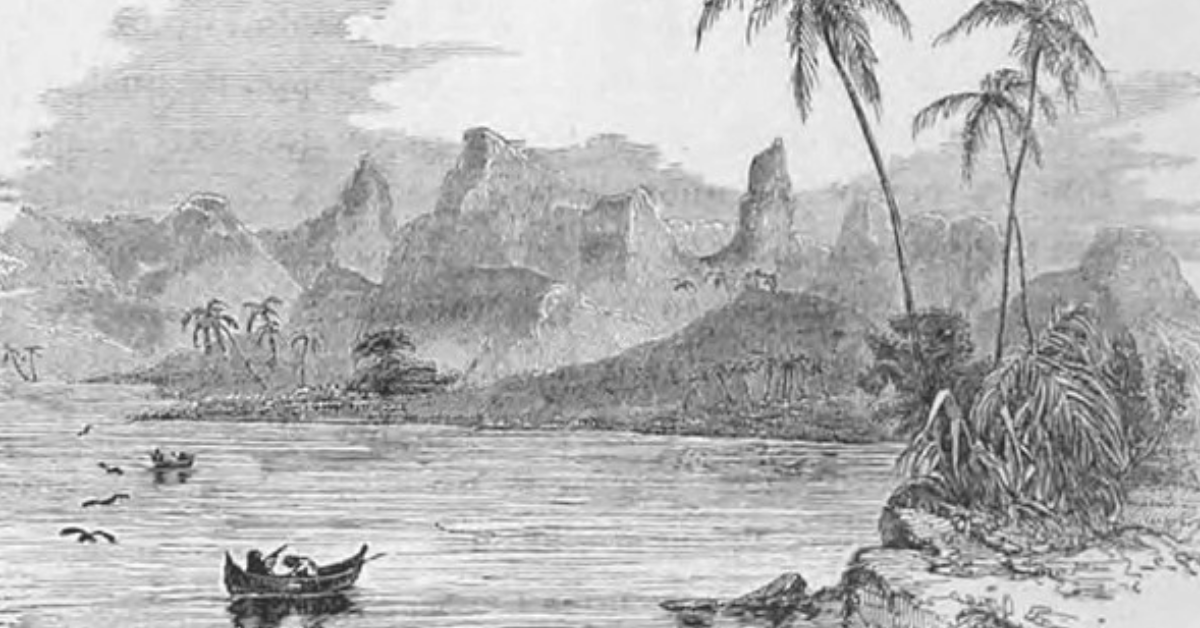 The greatest female sailors are casting off in their dinghies from the shores of Ekoshima in the Olympic Games. Over the last forty years, women’s sailing has hit new heights. Naomi James was the first woman to sail single-handed around the world via Cape Horn. Tracey Edwards captained the first all-female crew to circumnavigate the globe, while Ellen MacArthur broke the world record for the fastest solo circumnavigation. But three hundred years ago, sailors thought women were unlucky aboard ships and the French Navy banned women from ships. So how did Frenchwoman Jeanne Baret, manage to sneak on board a French exploration voyage in 1766? How did she become the first woman to circumnavigate the globe and what part did botany have to play?

A time of Scientific Discovery

The mid eighteenth century was an adventurous time to be a European sailor. Voyages were setting off to explore the Pacific and Southern Oceans and to see if they could find the mythical Southern Continent. These voyages of discovery were also science missions. Astronomers observed the transit of planets. Zoologists found new animals. Cartographers charted coastlines and lands. Botanists drew and described exotic floraI. In December 1766, Louis Antoine de Bougainville, set sail from Nantes to sail round the world and make discoveries. His fleet contained two ships, Boudeuse and the storeship Etoile. These were home to over 200 men for three years. In addition, the Etoile carried a botanist, Philibert Commercon, and Commercon’s servant.

Keen observers may have seen Commercon employ a servant on the Nantes dockside. But there was more to this servant than met the eye. While Commercon pretended he had only met the servant recently, in fact they had worked together for a number of years. The servant was none other than his housekeeper and partner, Jeanne Baret. The French Navy banned women from ships, so the pair concocted a plan. Jeanne disguised herself as a man. She pretended not to know Commercon. Luckily, the ships’ captain gave up his cabin because Commercon had a lot of equipment, so Jeanne had some privacy on board. But who was this adventuress?

Born on July 27, 1740 in Burgundy, France, Jeanne Baret was the daughter of Jean Baret and Jeanne Pochard. We know little about her background. Her father was a day labourer and did not sign her baptism record. He appears to have been illiterate. But somewhere, somehow his daughter learnt to read and write. Later she would sign her surname, Barret.

Jeanne loved plants from a young age and was known as a “herbwoman”. She probably knew about the medicinal qualities of herbs. A naturalist and doctor Phillibert Commercon moved to Toulon-sur-Arroux, a town about 20 km from the village where Jeanne grew up. And he needed a housekeeper. Jeanne got the job. It may be that Commercon taught her to write, because when his wife died in 1762, Jeanne started managing the household and Commercon’s affairs. She also appears to have started a relationship with Commercon.

In 1764, Baret discovered she was pregnant. Unmarried, she had to obtain a “certificate of pregnancy.” While most commentators agree Commercon was the father, Baret did not name him, or anyone else on the certificate. Commercon seems to have made complex arrangements to file the certificate. A lawyer and two witnesses travelled 30km to swear the certificate. After the birth of a son, Jean-Pierre in December 1764, Baret placed the child in the Paris Foundlings Hospital. As was normal practice, the authorities fostered Jean-Pierre with a wet-nurse, but sadly he died the following summer.

Meanwhile, Jeanne and Philibert moved to Paris. As well as acting as housekeeper, Jeanne also nursed Philibert when he was ill and organised his collections and papers. They worked well together. When Bouganville offered Commercon the role of botanist on Bouganville’s expedition, Commercon hesitated. He needed Jeanne on board with him.

Through their ruse, Baret was able to join the expedition. She settled into ship life, and although some questioned her sex, her disguise held for many months. After celebrating “Crossing the Line” the ship anchored in Montevideo. Here Baret went ashore with Commercon and explored the mountains and plains. It was arduous and dangerous. Baret carried supplies and specimens because Commercon was suffering a leg injury. Back on board, Baret described the specimens, shells, stones and plants they had collected.

Even when the ship’s captain was murdered in Rio, Baret ventured ashore. The difficult terrain in Patagonia did not deter her either. No matter the terrain, Baret plugged on in the name of science. By now, the crew were noting her bravery and strength. Bougainville noted Baret was a “highly trained botanist” who “followed his master in all his herbalisations, in the midst of the snows and on the icy mountains of the Strait of Magellan.” The ship bore round Cape Horn to set off across the Pacific, but the crew were beginning to mumble. There was something strange about Baret? Was he a man? They were suspicious about his body, voice and beardless chin. He never changed clothes or performed his necessaries in front of others. Suspicion was about to change into certainty.

The siren call of Tahiti bought many sailors to its shores. Captain Cook stopped there on his voyages. Sailors on the Bounty famously mutinied off its shores in 1789. Prior to Baret’s arrival, HMS Dolphin was the only ship to visit the island. HMS Dolphin was full of male sailors. Baret stepped ashore in April 1768. Immediately, Tahitians greeted her with excitement. They knew a woman when they saw one.

The other memorialists tell different stories of Baret’s denouement. One says a Tahitian identified Baret while Baret was still on board the Etoile. Bougainville also records this event. Three others record that servants identified Baret off New Ireland (an island in Papua New Guinea). They stripped her to find the truth. Bougaineville’s account is probably correct. The Tahitians told later visitors there had been a woman on board Bougainville’s ship. How would they have known, if the identification was made later in the voyage?

After Bougainville heard about Jeanne, he interviewed her. He records the following conversation in his book about his voyage.

When I was on board, L’Etoile, Baré, her eyes bathed in tears, confessed to me that she was a girl: she told me that at Rochefort she had deceived her master by presenting herself to him in men’s clothes at the very moment of his embarkation; that she had already served, as a lackey, a Genevan in Paris; that, born in Burgundy and an orphan, the loss of a lawsuit had reduced her to poverty and made her decide to disguise her sex; that besides, she knew, when she got on board, that it was a question of going around the world and that this trip had piqued her curiosity. She will be the first, and I owe her the justice that she has always conducted herself on board with the most scrupulous wisdom. She is neither ugly nor pretty, and is not more than twenty-six or twenty-seven years old

When Boudeuse and Etoile anchored at Mauritius, Jeanne and Commercon left the ship. The governor was a fellow botanist, and an old friend of Commercon. The opportunity to explore the botany of Mauritius, Madagascar and Reunion was too good to miss. Bougainville avoided the thorny problem of how to deal with a woman on board when he arrived in France. Baret resumed her duties as housekeeper and botany assistant. But, Commercon was ill. He died in 1773, aged 45 and Jeanne was a long way from home.

She worked in Mauritius, running a tavern. At some point she met Jean Dubernat, a non-commissioned officer in the French army. On 17 May 1774, Jean and Jeanne married. The pair returned to Paris, probably arriving in 1775 or 1776. On landing in France, Jeanne became the first woman to circumnavigate the globe.

Back in France, Jeanne inherited 600 livres, her back wages and the furnishings in the Paris apartment she had shared with Commercon. Before setting off on the voyage, Commercon had written a will. Jeanne had to involve the Attorney General to receive her inheritance.

She and Dubernat moved to Saint-Aulaye, where she died on August 5, 1807, at the age of 67. She left her estate to her husband, niece and nephews.

The Ministry of Marine recognised Baret’s botanical skill. The Ministry awarded her a pension of 200 livres a year in 1785 noting that:

Jeanne Baret, by means of a disguise, circumnavigated the globe on one of the vessels commanded by Mr de Bougainville. She devoted herself in particular to assisting Mr de Commerson, doctor and botanist, and shared with great courage the labours and dangers of this savant. Her behaviour was exemplary and Mr de Bougainville refers to it with all due credit…. His Lordship has been gracious enough to grant to this extraordinary woman a pension of two hundred livres a year to be drawn from the fund for invalid servicemen and this pension shall be payable from 1 January 1785.

During her lifetime, people knew Baret’s story. Bougainville printed a book about his voyages and mentioned her. Other voyagers left memoirs which mentioned her. Commercon had named a plant that he found on Madagascar after her. It was a tall shrub with white flowers, which Commercon named Baretia Bonafidia. The plant name disappeared as did her story. Recently more people are interested in her. Two English language biographers wrote about Jeanne Baret. In 2018, the International Astronomical Union named a mountain range on Pluto after her. In addition, Australians now learn her story at school.

Last year Danielle Clode published a new book about Jeanne, In Search of the Woman Who Sailed the World. It follows Danielle’s journey to find out more about Jeanne. This contains new research on Jeanne Baret from the French archives. Therefore, Jeanne Baret’s story is becoming more widely known. Last year, Google celebrated her birthday with a google doodle. So, we can now celebrate the first woman to circumnavigate the globe

Other books, not currently available but may be in your local library:

Monsieur Baret: First Woman Around the World, by John Dunmore